As a sales manager you may be thrown in all directions within the country and it becomes more and more difficult to plan a short weekend trip with your old friends. We faced such an issue when we were trying to plan something with a group that was split between Delhi, Mumbai and Lucknow. It was September but we zeroed in on Khajuraho nevertheless. While we had heard about this place being famous for its Temples, the sculptures, and associated architectural value, there’s much more to it. In this post, we will cover what you can do if visiting in off-season and things you should plan to explore in the right month of the year.

Our expectations from the trip

Essentially Khajuraho is all about the land of temples, History and mythology. Everyone knows this place is famous for the temples but we weren’t sure if we wanted to spend an entire weekend looking at the carvings on the temple walls, how so ever beautiful, intricate and famous they might be.

Well, it turned out that we were expecting much less from the destination but this place has great potential.

We kept Lucknow as our base with friends reaching Lucknow by either train or flight. We started off early at 4 am and touched base at Hotel Clarks at around 11.30 am.

Tip: Really essential to leave in the wee hours to beat all the traffic on Lucknow – Kanpur highway and within Kanpur city. The route, till you are in Uttar Pradesh, is a four laned highway which is comfortable to drive and even to enjoy as a passenger. The later half, post entering Madhya Pradesh, the condition of roads is horrible and you easily add an hour to your travel time for nothing good unless you choose to drive via Chhattarpur.

When we reached all we wanted to do was to check in to our rooms at Clarks Awadh, quickly freshen up and head for lunch. We found a really nice place, Raja Restaurant, for Indian food near our hotel which served good food albeit was a little slow to serve.

After lunch we decided to explore the world-famous temples, even though it was quite hot. You can’t go to Khajuraho and not go to the temples! And well, they are world-famous for a reason. Such intricate details carved in stone, one after another, so many idols, it was a wonder in itself. 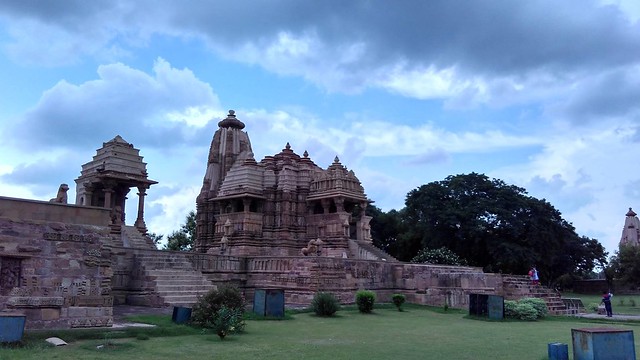 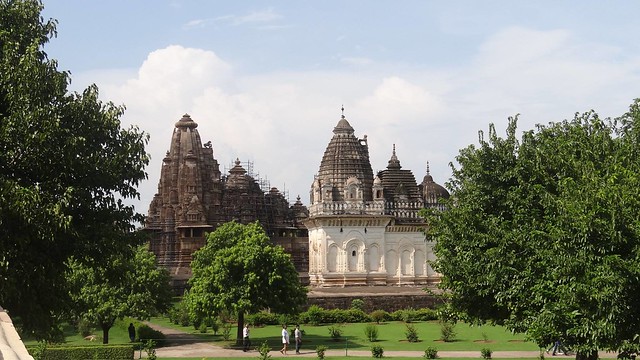 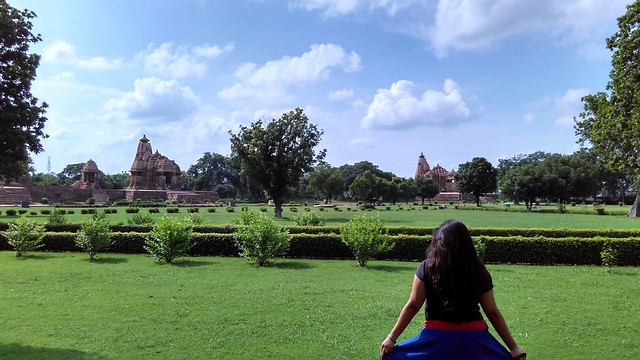 We were just starting to get tired of the sun and the heat and were contemplating if our decision to visit Khajuraho temples in the heat of Aug-Sep was a good idea. But then, it started raining. And it did feel like relief at first but then we realized that not only did we have to cut our visit to the temples short but also due to the rains, a sound and light show which happens near the temple site was cancelled for that day.

Tip: Light and sound show here is known to be a must-attend event for tourists and begins every evening around 6-6.30 PM

The rest of the evening was spent at the hotel, enjoying the pool and the indoor activities. We don’t usually pick pricey properties for our stay but offers on MakeMyTrip made this an inexpensive one. And of course, planning the itinerary for the next day.

We took an early start the next day to visit the Raneh falls. These falls are humongous, extremely beautiful and similar to the famous Niagara Falls.

Due to the excessively fast flow of the water from the fall, public access to the waters is restricted. Due to the design of the falls and the hills around it, it is a bit difficult to appreciate the beauty from the viewing area accessible to public. Which makes trespassing an attractive and dangerous option which should be best avoided. 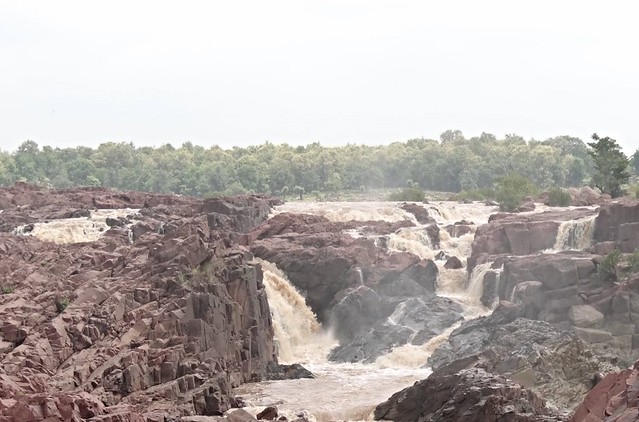 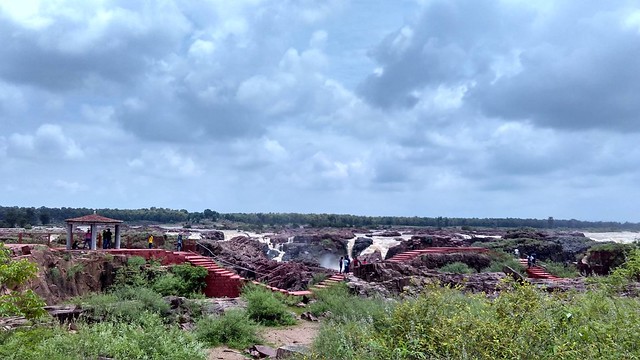 Other options to get a good view of the falls – explore trekking options around the falls, or leverage your contacts to get access to the restricted area.

These falls are located in the Chhattarpur district on Ken river and are about 20 kilometres away from Khajuraho.

Right next to the Falls is the Ken Ghariyal Sanctury which is home to innumerable Ghariyals, Wild boar, Neel gai and spotted dear. Though again, it was a bad time to visit as this sanctuary is open only from October to May and was shut at that time due to monsoon season. To read more about Ken Ghariyal Sanctury, visit the Official Website for Madhya Pradesh Tourism

Right afterwards, we decided to rush off in the opposite direction, towards Panna national park which is one of the best maintained tiger reserves of India. Again, since we were visiting in off season the national park was shut and we were unable to go inside. 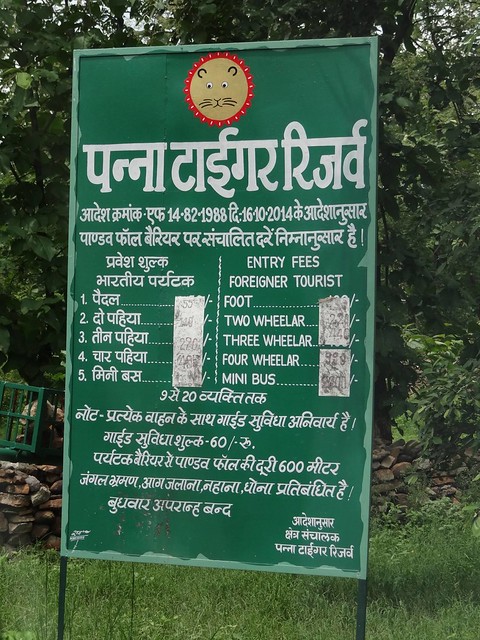 But we were allowed entry to Pandav falls, which are right next to Panna national park. These falls are very beautiful, very different from the fast gushing water of Raneh. These falls are more calm, serene and in fact, we liked these falls much more for the positive energy and the beauty associated with it. 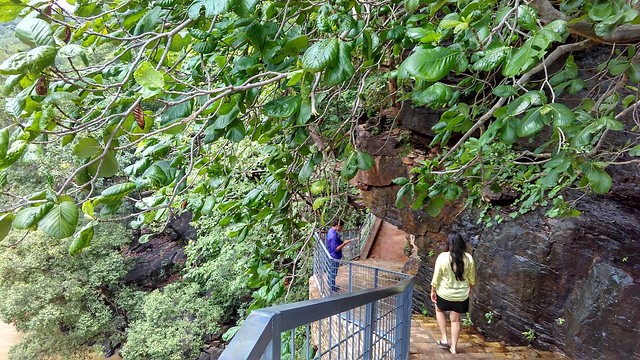 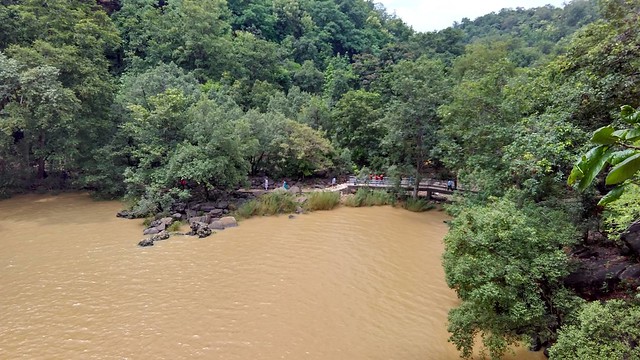 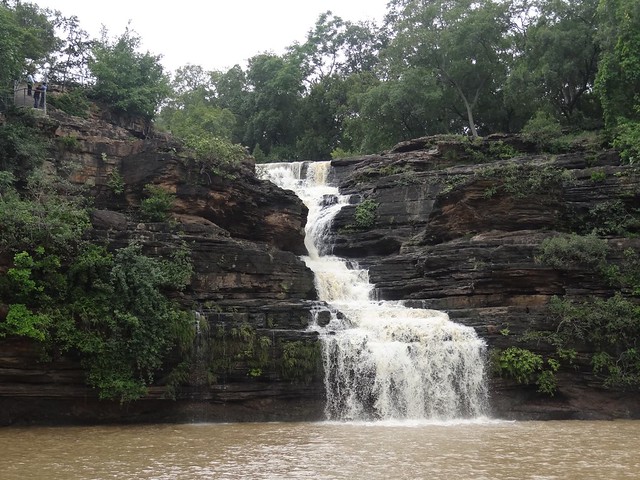 Of course, another story tells that this was to show the love between draupadi and her husbands and hence, if a couple drinks a drop from the falls, the guy in the relationship always takes care of the girl and the relationship strengthens. 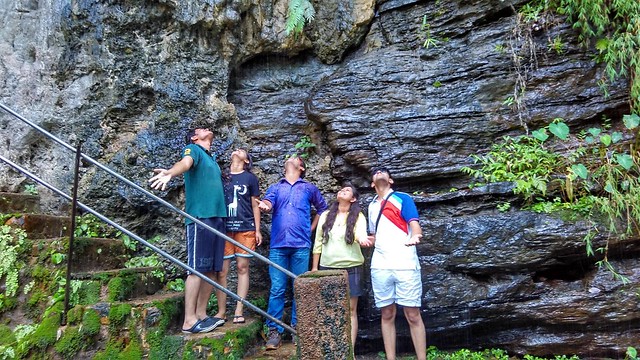 Myth or reality, it’s just amusing to look at this quietly hidden place, the caves with idols of Pandavas and connect with the stories told about it. Point to be noted here is that you need to climb down 166 stairs to visit the falls and it’s a spiral climb down, so it’s suggested that you wear comfortable shoes.

After this, it was time to head back, grab lunch and start for the drive back to Lucknow. Of course, it would have been best to visit this place from October to April when we could have explored both the sanctuaries, but in off-season, being able to spend some time in the serenity of Pandav falls and Raneh falls was completely worth it.

From Mumbai : Easiest Way to get there is to take a direct flight to Jabalpur or Lucknow and a taxi from there to Khajuraho. Khajuraho is 6 hours drive away from both Jabalpur & Lucknow

From Delhi : Cheapest way : Take the night train, Sampark Kranti express (22448) which leaves Delhi at 2010 hrs and reaches Khajuraho at 0635 hrs in the morning.

Another option, take a train to Agra and a direct flight to Khajuraho from there every Monday and Saturday (AI 406)

All these three places are at a distance of 40 minutes to 1 hour from each other. Hence, choose wisely which place you would like to stay in. Khajuraho has a center of the city feel, Panna – forest and Ken, the river side feel.

October – April (for access to Sanctuaries) ; For the rest of the year, visit the two falls described above

Planning a trip in Off Season?

Check out the other photos on our Facebook page or our Flickr album to help decide whether you want to visit Khajuraho now or later in the season.

If you have already been here or to other similar places, share your experiences or engage in a conversation below.

If you haven’t subscribed to our posts already, get started now – Receive Notifications