For the time-poor individuals looking to get away from the mad rush of city-life, here’s a getaway where you should ditch the unnecessary and #travel.like.a.student. This is an account of our recent expedition to Matheran, a hill station which is quite close to both Mumbai and Pune, and is inexpensive as well.

In true blue Bombay fashion I have been to all the getaways in and around the city with my family come every summer. Matheran was one of the many places on the list that we as a family of four along with the erstwhile “family friends” visited. A typical outing over the weekend meant hauling luggage in car, driving into the sunrise to reach a family resort and indulging yourself with the services offered by the same thus beguiling myself into thinking that I had finally escaped the mundane into the cradle of nature. It was only recently when I went again to Matheran after 7 long years and not with my family or my “family friends” that I realized how great a disservice I had done to the beautiful hill station with red sand and hauntingly beautiful walks.

So for all those time-poor individuals wanting to get away for a weekend from the mad, mad rush of Mumbai (or Pune for that matter since both are close by)- here is my advice: ditch the unnecessary & travel like a student. I say student, because yes I travelled while in my second year at a prestigious, well known B school in Mumbai – we wanted to have plain, good natured fun; revel in the greenery & peace that the hill station was known to offer minus the frills and fancies that resorts offered while taking you away from the actual beauty of the hill station and while making you believe that you got what you had come there for – peace and a glimpse of the mountain’s soul.

We started in the morning at around 5 am from Andheri where our hostels were located and we had to get to a point on the railway station map called Neral. Word of caution here: Neral is a town in the Raigad district of Maharashtra & comes on the Central Line. It is different from Nerul which is a part of New Bombay and comes on the harbor line. Upon reaching Neral, you have the option of taking the many Maruti Omni Vans lined up to cart tourists to Matheran as cars are not allowed beyond a point on the hill station or you can take the toy train which comes down every two hours. We opted for the 9:00 am train which would take us around 2 hours to reach Matheran.

Having reached the Matheran Railway station we wanted a place where we could keep our baggage and the options ranged from rooms to lodges to resorts of course! We finally zeroed in on a room with three double beds for the six of us where we could keep our bags and stay the night after we came back from surveying the hill station. Now a few quick facts about Matheran…

We decided to set on foot to cover various points.

It was truly one of the most exhilarating walks I have undertaken. A 20 km stretch laden with around 8 good points, walked through red sand covered paths that cut through the forests that loomed over us sheltering us from the sun and creating a cooling and calming effect. The air was hung with a mystery – a promise that only paths that cut through woods hold, although it never bordered on gloomy or creepy, it ranked with a melancholy that hills know of. There were beautiful British styled bungalows which we could catch glimpses of through the dense green cover that seemed to hark back at another era, a Parsi  graveyard that we almost walked into but were shooed away from – there was an eerie silence that is characteristic of most graveyards and we thought better than to enter the solemn site although our thirst for adventure beckoned us to do otherwise.

I remember some traveler once saying that it is not about the destination but the journey that one undertakes to reach the final place. While every path we undertook with the intention of reaching a designated look out point, frankly it was the path itself that was so fantastical, so beautiful – the red sand underneath our feet, the damp moist air that fanned at our ears and the dense green cover that filtered the sun rays which kissed us mildly on our hands at times, if they could penetrate at all. Silence ahead & silence behind- twigs breaking under our feet & sometimes the wind would play with us – that journey was what made looking forward even more beautiful. The lookout points gave a breathtaking view of the hills and the greenery, and of we would go through to woods again from one look out point to another.

At one look out point or another, between the hours that stretched, we stopped by at those ramshackle ‘chai & juice points’. To catch our breathe & have a sip of kokam sherbet or hot chai and gaze out by the cliffs as the sun broke a haze over the hills and the valley shined below.  Some of the many points that we covered and which I found truly remarkable and of note here are:

Charlotte lake: Truly a beautiful point. The lake just stretched on with greenery on either side and a gently inclined bank. There are red sand roads up an incline that you can take or like us if you are adventurous, work your way down the incline and trudge your way while taking support of low hanging tree  branches and go down till the incline breaks into a flat bank close to the lake. You can then settle down by the lake itself, dipping your feet into the water and throw pebbles to see how far can they land in the water and how far can they bob up and down before finally sinking into the bottom. You can feel the breeze blowing the water at its surface while you gaze at the opposite bank with its woods looking both mysterious & beckoning against the now evening light. There is a small eatery right at the banks of the lake overlooking it- a good view where you can have chai (made from special herbs) and the erstwhile maharashtrian fare such as ‘poha’ or ‘upma’.

One tree hill: As the name says, you reach a point which overlooks a hill where you can, literally, see just one tree swaying gently in the wind. But what really sets this point apart is the long 6 km stretch that one needs to take from the fork that separates the market area and this point. It is probably one of the most beautiful walks on the hill station. It has low hanging branches and a straight lonely road with dense bushes on either side that slope down on the right to various other points that we didn’t take a detour to. On the left you will see the dense cover breaking into narrower paths that lead to huge Parsee style homes once in a while. The whole setting has a very peaceful feeling to it. The road finally breaks down and descends down to meet the sky and you can see a range of hills to your left, and a huge steep hill with a broken ridge in between before another hill, that is not easy to climb without probably professional gear, and which strangely has no green cover except the lone tree perched on the cliff almost touching the sky yet keeling under the wind making it look like it could tumble down down the ravine any moment.

We must have walked a good 20 km that day covering around 8-10 of the 39 odd points, each walk taking us away from the mundane that we had escaped from to come to this beautiful hill station and each path making us wish that we would keep walking through this beauty and take in as much of it as we could.

Ready Reckoner for undertaking a 2D/1N trip to Matheran: 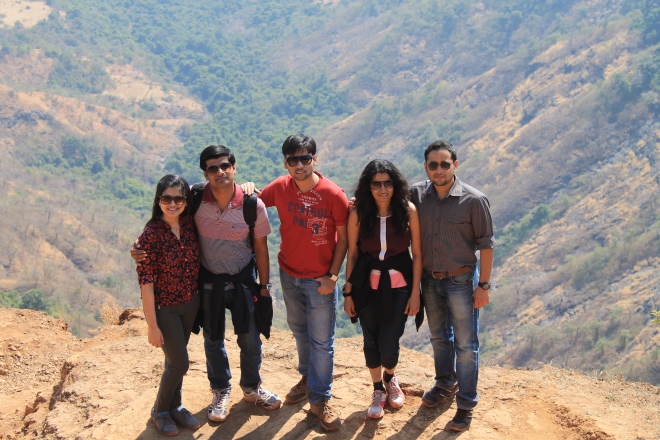 Signing off. Truly! Some paths are meant to be discovered and cherished.

Matheran- forest on the forehead

5 thoughts on “Travel like a student: a brief sojourn to Matheran”